Ontario Walleye fishing around Chapleau Ontario is said to be some of Canada’s best! Chapleau Ontario is located in the Northeast part of the province 3.5 hours north of the boarder of Sault Ste. Marie Michigan. In Ontario any Walleye over 30 inches is deemed to be a trophy.

Our sparkling clean Northern lakes and rivers produce good size as well as large numbers of Walleye. Even the most seasoned fisher-person will get excited just thinking about fishing this far north. Kanipahow Wilderness Resort is fortunate to be on the Chapleau Lake/River system which never stops supplying our walleyes with fresh water and lots of food. 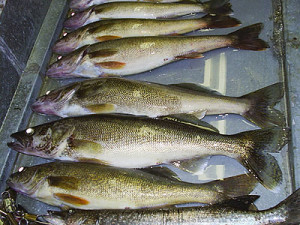 The river has as many as 45 sets of rapids over 6o miles that supplies perfect spawning grounds which keeps the population of Walleyes high and healthy year after year. The big secret to finding and catching early season walleyes is the fact that there really aren’t that many secrets.  Instead  it’s a matter of reading the conditions and reacting to them, and then maybe investing a little elbow grease.  It’s always a challenge but there’s always hope, and if you can keep an open mind you could be well on your way to putting together a nice early season catch.

Finding a logical place to start is the first piece of the puzzle and includes the classic variety like shallow rock and gravel shorelines and bars.  Rocks certainly are important as they are the key to successful walleye spawns, but not all of the good walleye lakes have a lot of rocks.  In fact some of them are completely void, and one of the big reasons they are often overlooked.  All of the above information can give you some confidence and if you know a lake has fishable numbers of walleyes you’ll give it more effort and will be less likely to throw in the towel if you don’t first succeed.  Confidence plays a major role in any angler’s success and is the key to good catches. Locating early season walleyes in unnatural and natural walleye lakes alike is not all that difficult, and really starts at the weed line.  Weed lines attract and hold spawning perch, minnows, crustaceans and insects (including larvae) all of which can pull in hungry walleyes.   Early season weed lines are usually just starting to pop up leaving walleyes out in the open where they can be easily found and caught.  A little later on the weeds can become so dense that they’re impenetrable, restricting anglers to the outside edges.  Larger weed lines have a better chance of holding more fish than smaller ones simply because of their size as they can afford more feeding opportunities.  They also require a flat area in the right depth range and with the proper bottom content to develop the densest growth. Likely depth ranges include four or five feet to maybe fifteen or so, depending on bottom content and water clarity.   Finding early growth can be done a couple of ways including keeping your eyes glued to a good depth finder and looking for light growth close to the bottom. If you’re seeing some weeds popping up you can go back and work them over by dragging a bait like a jig and minnow (live minnows are a must in the early season). 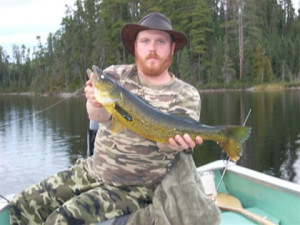 Another option for finding and catching fish is running a crankbait like a #7 or #9 Shad Rap right over the tops of the weeds but unless the fish are really charged up it’s hard to beat the jig and minnow combo.  A jig and shiner is a top early producer and Northland Tackle has designed a perfect jig for the dragging technique called the Shiner Jig.  The tricky jig has a long shank hook that can be run through the mouth, out the gill, and back up the side keeping the minnow alive and putting the hook back far enough to nail the short strikers.  A basic drag includes casting the jig and minnow out a short distance from the boat and either drifting with the wind or moving steadily along with the use of the motor.

The key is getting the bait to the bottom, giving it a short snap, and then letting the jig fall back to the bottom before repeating the process.  Detecting a light bite of a walleye can be tough and is all about feel and is where a good graphite rod can make a difference.  A great rod like a 6’3” medium action Tournament series can really help and the difference can be surprising.  In fact you can actually feel a walleye pickup on slack line and is a real eye opener. When working over a weed flat; be sure to hit it all from deep to shallow.